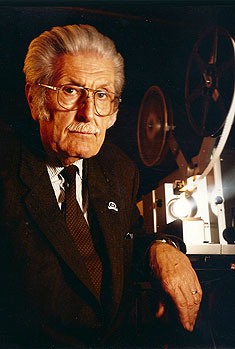 Tomàs Mallol (b. Sant Pere Pescador, 1923 – Girona, 2013) has always been a film buff. When he was a boy, the travelling film shows that came to his village made a deep impression on him, which became a permanent passion for everything related to the world of the cinema. Above all he was interested in the technical aspects (optics, lighting, the film feed mechanism), so much so that when he was eight he built his first projector with which he entertained his friends and relatives, and which is now part of the collection.

After the Spanish Civil War, having qualified as an industrial technician he went to live in Barcelona, where he worked in various jobs. Finally, it was as a photographer and publicist that he shaped his professional profile.

Married with two daughters, for many years he lived between Barcelona and Torroella de Fluvià (Alt Empordà). In those years, as a member of the Catalan Ramblers' Association's photography club, he made contact with several people with whom he shared an interest in photography and amateur filmmaking.

In 1956, Tomàs Mallol made his first amateur film, El pastor de Can Sopa, and a first and only foray into professional filmmaking as director of photography in the Spanish-Italian co-production Su propio destino. He gave up professional filmmaking because of the subordination and servitude that came with it, which had little to do with the film's artistic criteria, and he decided to continue as an amateur filmmaker, founding the UCA (Amateur Filmmakers' Union), based in Barcelona.

In the mid 1960s, at the same time and as a consequence of his activity as an amateur filmmaker, he collected several narrow-gauge cameras, not initially with the idea of collecting them. Years later, after reading C.W. Ceram's book Archaeology of the Cinema, he decided to focus his collection on the archaeology of the cinema, without abandoning the amateur or children's film devices. Tomàs Mallol then began his intense study and research of objects that led him, for over 30 years, to build up a collection of pre-cinema and early cinema objects and devices.

Tomàs Mallol died in Girona on June 16, 2013 (89 years old). He leaves a legacy of an extraordinary collection on the prehistory and origins of cinema, which significantly enriches the cinematic heritage of our country. This collection will be an important tool for current and future generations to know and understand the origins of our media culture.