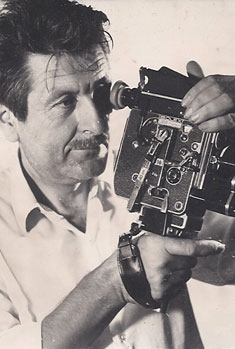 Tomàs Mallol has always felt passionate about the cinema and its technology. Although he already had an amateur film camera, he did not make contact with amateur filmmakers until the mid 1950s, after a screening in Barcelona of La Gente Joven del Cine Amateur (Jordi Feliu, Pere Balañá, Jordi Juyol...). At the same time, he joined the Agrupació Fotogràfica de Catalunya (AFC), where with other amateur film lovers he created the AFC's film section in 1956. That year, Mallol made his first non-homemade film, El Pastor de Can Sopa. together with other colleagues, he became a member of the amateur film section of the Centre Excursionista de Catalunya (Catalan Ramblers' Association). In those years, Mallol made his first and only foray into the professional cinema as director of photography on the Spanish-Italian co-production Su propio destino, but he gave up the professional cinema due to the subordination and servitude that it entailed. He also created, together with two other members, Telemovix, a television production company that made various advertisements and series for Televisión Española, but which did not last long.

In 1968, Tomàs Mallol and other members of the AFC's Film Section left to found the Amateur Filmmakers' Union (UCA), of which he was named president. This body lasted until 1984. Throughout the 1960s and1970s Mallol won several prizes in national and international amateur filmmaking competitions, and five of his films were chosen to represent Spain at the International Competition of the UNICA (Union Internationale du Cinéma Amateur).